Matt and I have the flu- when this passes, I want a medal for surviving.  Seriously.  It’s one thing to be sick, but when the kids feel perfectly fine- it’s more like torture.  Has this ever happened at your house?  Here’s a glimpse:

When the children literally started bouncing off walls, I tried to take them on a walk, and give Matt a nap.  We only made it down the street before I actually suggested they run up and down my neighbor’s empty slanted driveway- for 5 minutes.  Then we turned back home with them running and screaming the whole way.  I think it helped- I promptly collapsed on the bed after tapping Matt for his shift.

We’ve played Simon says in the living room five times in two days- today Simon challenged the oldest and the middle child (still a toddler) to jump in place for a minute straight- they did it!  Simon sat on the couch.

We took turns with the thermometer, and passed the tylenol every few hours.

A kind, inspired woman brought stew (bless her- and whomever it was that invented tylenol).

We tried to convince the children not to inflict bodily harm on anyone- while we slept.

They also ate a lot of crackers, raisins, and anything else that didn’t require preparation- like popcorn (while watching more than a few movies).

When I couldn’t sleep, I caught up on some primary work- and typed a few posts. 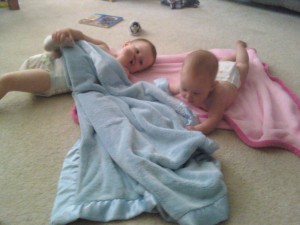 Follow So this is BLISS on WordPress.com
Join 609 other subscribers